It is hard. And I’m Not Sorry

“It is hard. And I’m not sorry,” is my new go to phrase for those conversations where the stakes are high, the outcome uncertain, and I have to take a risk. It could be talking with a friend about my hurt feelings, a discussion to hold a co-worker accountable, or conversation with a neighbor about a racial slur.

“It is hard,” acknowledges that I’d rather be anywhere else, like at a dentist appointment, bathing suit shopping, or spending hours waiting on a car repair surrounded by the smell of tires, than in this conversation at this particular time.  The topic could be emotionally charged or politically potent. Maybe it’s embarrassing or awkward. “It’s hard,” spoken or thought, helps me have compassion for myself and my conversation partner as we stumble through saying what we mean in a way that can be understood.

“And I’m not sorry,” helps me summon the courage for the conversation. I don’t have to apologize for bringing up issues that make others uncomfortable. I owe it to myself to enter the fray. I regret more things I didn’t say than things I did. My mouth can be a steel trap, keeping big feelings, hard questions and unpopular truths locked inside.  I wonder how my life would be different if I had been able to say what I really meant.

I can see forever from the top of the South Rim Trail at Big Bend National Park. I’m reminded of the first time I snorkeled in the ocean. When I put my face in the water and opened my eyes the expanse, unstopped by pool walls, startled me so much I had to swim back to where I could stand and get my bearings.

Here, forever stretches not just in terms of geography but also in terms of time. I’m accustomed to trying to imagine what the landscape looked like before the subdivisions and Starbucks and Midas Muffler shops chewed up the prairie where my hometown Parker, Colorado now is. I tell people that I remember when Highlands Ranch, a large suburb of Denver, was a real ranch, with actual deer and antelope playing among the cattle. Here, in the desert corner of southwest Texas, my imagination stretches back to prehistoric times when this area was a muggy swamp populated by dinosaurs.

Everywhere I hike national park posted signs remind me to stay on the trail, that the ecosystem here is fragile. And it is. But this place is also timeless, enduring. It has survived to be home to the bravoceratops and the mountain lion, the gryposaurus and the javelina. This place has adjusted to climate changes and accommodated new species. People are like that – both easily broken and infinitely resilient.

Life changes us. There are the cataclysmic events of death, divorce, and trauma. The seismic shifts of falling in love and new vocational calls.  And there’s the seemingly inconsequential events that shape us — the sarcastic joke that makes us wince, the bid for friendship that is never answered, the affirmation of a talent we haven’t yet explored. These moments are like the steady stream of the Rio Grande that carves a canyon in desert rock. There are things that change us forever. And we persist.

I was surprised that I wanted to go to church. I was in the middle of a six-week renewal leave from local church ministry and had purposefully avoided anything to do with church the first few weeks. I ended up in a small church in a small town on a high mountain of Colorado.   I had been invited by a friend who couldn’t go with me. When I walked into the sanctuary almost half way through the worship service the entire congregation turned to look at me – all seventeen of them. There was the guy with unwashed, shoulder length hair who had his own oxygen tank. The woman in mismatched shoes. The family with the two children who ran around the edges of the sanctuary. The boy, about 10, pulled his arms into his sleeves and fluttered his hands like wings while he made wet motor sounds with his lips. I wanted someone to sit on him. There was one woman who looked like someone who could be my friend. “What an island of misfit toys,” I thought.

And then something happened. The prayer of confession’s words were familiar, “Most merciful God, we confess that we have sinned against you in thought, word, and deed, by what we have done and what we left undone…” The difference was that in this church we knelt to pray. We knelt on the floor. We knelt on the worn carpet and muttered our prayers together, “We have not loved you with our whole heart; we have not loved our neighbors as ourselves.” Tears pricked my eyes. They weren’t tears of guilt or shame. The prayer of confession became a moment of unexpected grace. Something snuck in.

And then the pastor sat on a pew facing the congregation and led us in a conversation about the scripture passage, Jesus’ story about a man whose harvest was so plentiful he decided to tear down his barn and build a bigger one but dies that night. The conversation touched on the congregation’s successful badgering of a local supermarket chain to provide food for the free community meals that they host several times a week. Among these folks, many of whom looked like at one time or another they had trouble paying their rent, or an electricity bill or buying groceries, I thought about how my own anxiety about money traps me. And how it traps my church.  I thought of how we want to be the “cool kids.” And in that moment I wanted to be one of the misfit toys.

As I worshipped with this strange little congregation I let down my defenses. This congregation couldn’t worry about slick church growth strategies or programs attractive to young couples with attractive children and baby boomers with money to give. One day they may not be able to fix the roof or pay their pastor. But for now they’ll follow Jesus in their little church in their little mountain town.  And my heart was strangely warmed.

I got to see John Wesley’s nightcap. Also his glasses and his writing desk. For most people seeing the personal effects of the 18th century founder of the Methodist movement that was the precursor to many Christian denominations would be what you do in London if it’s pouring outside, and you’ve been to Madame Tussauds twice and all the pubs are closed. For me it was a highlight.

John Wesley was an Anglican priest who, with his brother Charles, started a renewal movement in the Church of England. He insisted that the personal piety of prayers and Bible study be linked to acts of mercy and social justice. Under John Wesley’s leadership early Methodists took on prison reform, created schools for the children of factory workers, built hospitals, and worked for the abolition of slavery. During his lifetime Wesley road 250,000 miles on horseback, delivered 40,000 sermons and, though not a wealthy man, gave away £30,000 (about £1,680,900.00 according to www.nationalarchives.gov.uk/currency). When Wesley died in 1791 the Methodist movement had over 135,000 members and 541 itinerant preachers.

John Wesley was a force of nature. I count it a major accomplishment if I write a sermon and do my laundry on the same day. But when I saw Wesley’s nightcap and eyeglasses I didn’t remember his success, but his failures.

John’s stint as a missionary to Savannah, Georgia ended with him fleeing in the middle of the night to avoid civil charges, brought on when he denied communion to a former girlfriend. He returned to England in a spiritual crisis, uncertain if he could continue to preach. His personal life wasn’t an unmitigated success. John didn’t marry until he 48 years old and it wasn’t a happy union. After they finally separated Wesley wrote in his journal, “I did not quit her. I did not dismiss her. I will not call her back.”

I love reading Wesley’s sermons on grace (God’s free gift of love that we cannot earn). If Wesley, who worked so hard to earn God’s favor and failed so miserably, could experience God’s grace, then maybe there’s hope for me.

These days I find myself encouraged by Peter Boehler’s advice to Wesley upon Wesley’s return from the American colonies: “Preach faith until you have it, and then, because you have it, you will preach faith.” Wesley went on to have a “heart warming experience” in which he became absolutely assured of God’s love for him. I wonder if he would have had that experience without first feeling God’s crushing absence. 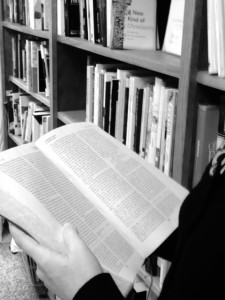 There’s the vulnerability of wrestling with the text. It can be a real match between what I wish the Bible said, what it really says, who I think I am, who I really am, who I want to be, and what the Spirit seems to be saying. I dare to let my soul be shaped by that encounter.

And then there’s the vulnerability before the congregation. In my 6th year at my church I think folks know me now. When I preach about patience they know the times when I’ve interrupted someone while I was trying to make a point. When I urge boldness they know when I’ve lost my nerve. When I preach about keeping promises they know when I haven’t followed through. They’ve brought me casseroles after a medical procedure and cookies for encouragement. Many of my congregants were there the Sunday I announced, through tears, my divorce. A few heard me swear like a sailor after slipping on the tile in our Narthex (on Christmas Eve). They know me.

All I really have to offer my congregation is the result of my wrestling match with God. I try to preach from scars and not from wounds.[1] My most personal sermons are often the ones where I don’t tell a single personal story.

My best sermons aren’t always the ones with the clever jokes or video-clips or tear- jerking stories. They are the ones where I offer my very self.

[1] Nadia Bolz-Weber uses “scars and wounds” to talk about how she chooses what to reveal about her life. She shares stories about things that are her past, and doesn’t share wounds that still hurt in her present.